As the year winds down, it’s naturally a time of retrospection. At the beginning of the year I chose as “my” word reconciliation. I vowed to reconcile myself to my limited mobility and the changes in my body caused by chronic illness. With only a few weeks left in 2018, I decided to see how I’ve done. Not so good. The three-year anniversary of my Primary Lateral Sclerosis (PLS) diagnosis came and went on November 17, and I’m no more resigned now to my stumbling gait, weak fingers, and hunched body than I was then.  At first I planned to write a blog about this woe-is-me anniversary. Then I went to church on Sunday morning. As often happens to me, the message and the Sunday school lesson seemed to have been written especially for me. Whining can have some serious consequences, especially for people who call themselves followers of Christ.

Reconciliation is defined as “when someone becomes resigned to something not desired.” I do not gracefully resign myself to limitations that have arrived far too early. I cry out to God for relief. Scripture says we should do that. But whining is an altogether different, less attractive, outfit worn by many, including myself. I was reminded of this in our study of Moses Sunday. The Israelites and some of their Egyptian buddies were tired of wandering around in the wilderness. They complained to Moses about it instead of praying to God. Apparently, they’d already forgotten how God used Moses to bring them out of slavery. God also made sure they had food and water every day. All he asked in return was that they have faith. They complained so much about a steady diet of manna, he finally rained down fire on them and they died.

To our amazement, that didn’t seem to bother those who were left. They went right on complaining. Manna wasn’t good enough (our Sunday School teacher says the description of manna reminds her of donuts. I guess you can even get tired of eating donuts three times a day). They wanted meat like they ate in Egypt. Thoroughly aggravated now, God said, “Fine. You want meat. I’ll give you meat and you will eat it every day for a month. Until you are so stuffed it’ll run out your noses.” Sure enough, quail flocked to the area, flying only about three feet above the ground. Even those of us who are poor shots could’ve hit them. The people ate their fill and ate and ate—until they died of gluttony with meat stuck in their teeth.

Ouch. It reminds me of something many of us told our children when they complained about our choice of meals for supper. “You get what you get, and you don’t throw a fit.” Then there’s the admonition “be careful what you ask for. You might get it.”

Metastatic cancer and chronic, degenerative motor neuron diseases are not the same as being tired of eating donuts every day, but whining doesn’t make them better.  I’m struggling to understand how God will use my troubles for good. I know He is made strong in my weakness. I’ve read all the same scriptures that people like to offer as comfort.

Which leads me to Pastor David’s sermon on hope. He reminded us that we’re supposed to have the character of Christ. To be Christ-like. That requires us to embody the fruits of the spirit. He suggested that the members of the congregation put those characteristics in a series of sentences to see how they fit us.

Fortunately. We can change. No doubt, it’s a struggle. It doesn’t happen in a day. Or a week. Or a year.

That’s why I’ve chosen a new word for 2019. Perseverance. “Steadfastness in doing something despite difficulty or delay in achieving success.” Also known as

stubbornness, something at which many of us excel. We can become reconciled to that which is not desired. We can be joyful like our late President George H.W. Bush, who spent the last years of his life using a wheelchair despite once having been an avid tennis player, baseball player, and golfer. 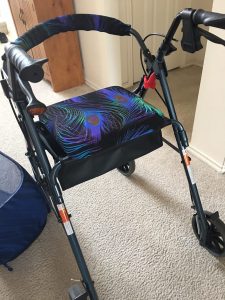 Which brings me to one of my least favorite scriptures (no, we do not get to pick and choose which ones we write on our hearts): “we also glory in our sufferings, because we know that suffering produces perseverance; perseverance, character; and character, hope.  And hope does not put us to shame, because God’s love has been poured out into our hearts through the Holy Spirit, who has been given to us.” Romans 5:35 (NIV)

We might not understand why God doesn’t take the cup from us, but we know He is good. He can and will use our suffering. Our stubbornness—I mean perseverance—will be duly noted by our Lord and Savior.

“And let us run with perseverance the race marked out for us, fixing our eyes on Jesus, the pioneer and perfecter of faith. For the joy set before him He endured the cross, scorning its shame, and sat down at the right hand of the throne of God.  Consider him who endured such opposition from sinners, so that you will not grow weary and lose heart.” (Hebrews 12:2-3)

How do you overcome the desire to complain? What motivates you to persevere despite suffering? Feel free to share below!